Final thoughts on the setup process and installation. – a moment of reflection

1 week to set up (admittedly I had to work during this time) seemed like a huge luxury and I guess it was. But due to “technical issues” it was necessary. I’m glad I never panicked as this meant that during the many computer swaps and attempted re installs I was finding time to play with the setup.

The space and a new appreciation for Black cloth and gaff.
some 15 to 20m of black cloth managed to turn a theory room and piles of furniture into an inviting space. Every time a piece of clutter was removed the works came into more focus. 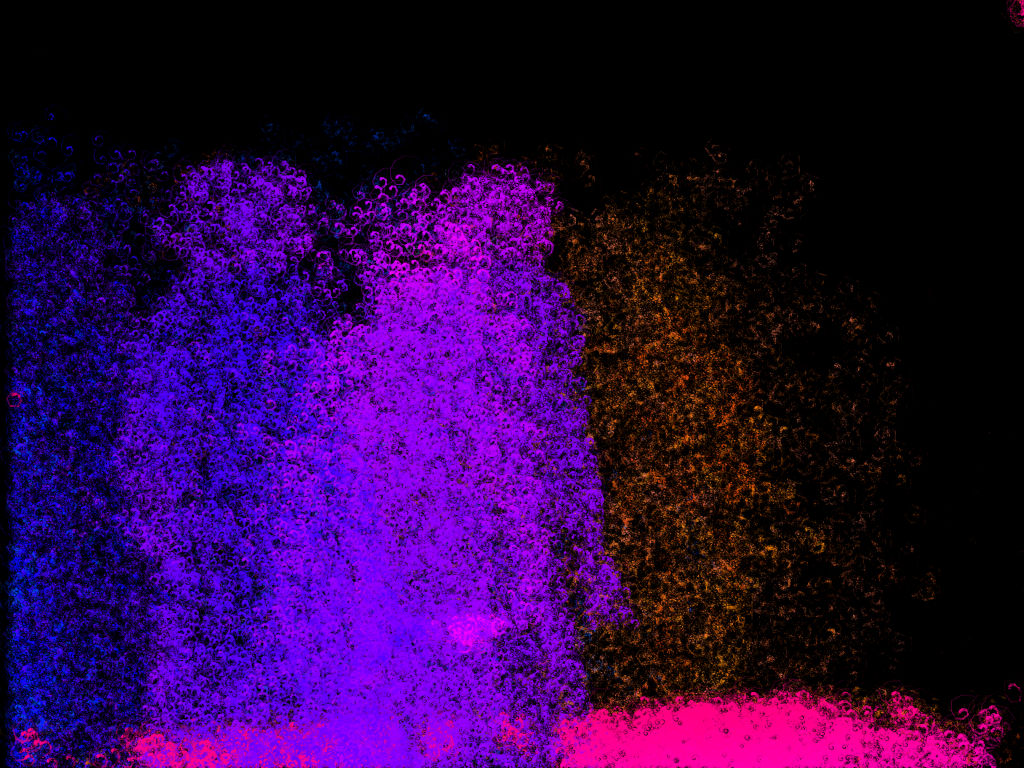 Although I called my work “Seated figure ?” I started to question the purpose of the stool. While setting up and testing the settings I tended to walk around the space creating more dynamic imagery. WIth multiple people in the room this became even more interesting. So the obvious question was should the stool go?. I would need to change quite a bit of my rationale and get a new title, it would be a bit of work but not impossible, definitely something to mull over. 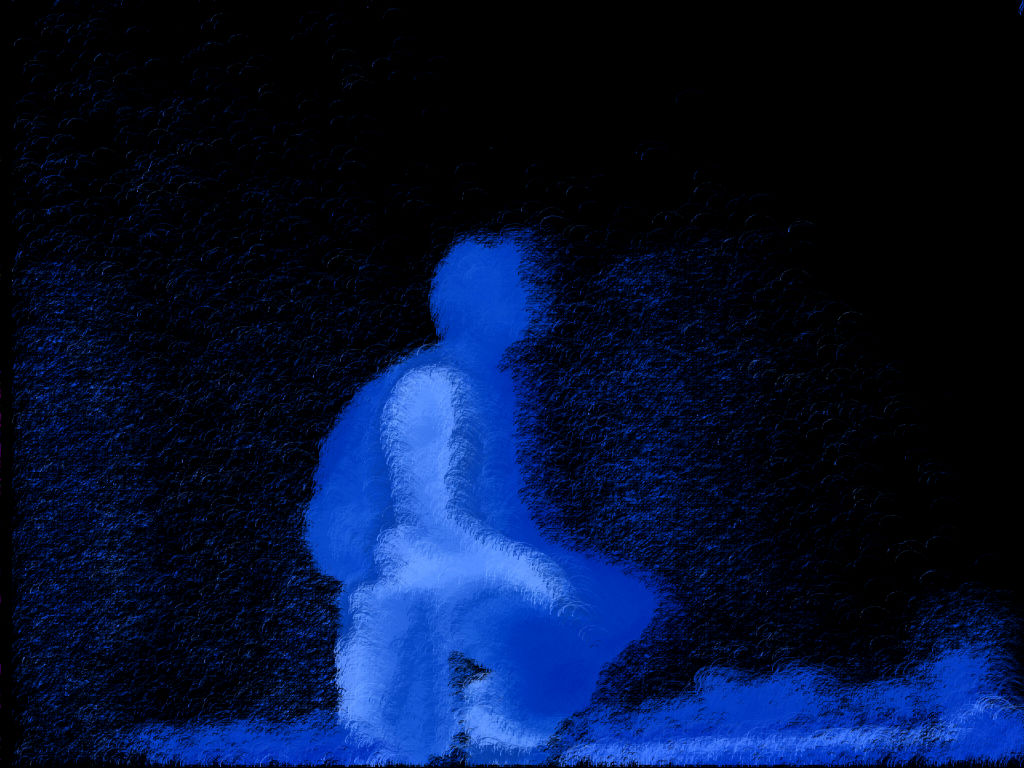 After a huge day of chasing computers and running back between work and Art school everything was finally in place. I sat down exhausted in front of my work. I was stuck was it muscle fatigue who knows but I sat there for some 15 minutes not moving being redrawn many 100′s of times each time a with a little more definition. I was trapped, transfixed I had caught myself in my own trap suddenly all the reasons for the inclusion of the stool returned it was absolutely the right choice. Sure there is fun to be had wandering around making patterns, its quite engaging on a simple level but letting yourself be taken in by the work is where the magic lies. Maybe this was just my own self-indulgence or a by product of my exhaustion and emotional state but if someone else finds them selves similarly trapped by the work I will be extremely satisfied. I people just wander by and think it looks kind of cool that will be ok at least it might give the work a life so it can lie in wait for the perfect sitter so something greater can be shared.

Sound & symbiotic relationships
It did occur that it may be  a parasitic relationship with me leaching sound from Ryans work, however I tend to feel that entering our space will people in to the right emotional state to view each others work. That the two works although completely separate do share a similar emotional space, and who evers work is viewed first will in help set the viewer/listener up to appreciate the second even more. When I first heard Ryans experiments for what we was planning I new that it fit perfectly with the head space I was in but I was still surprised by the final impact. When I was tweaking my work it always seemed to be missing something vital if Ryans work was turned off. I am very happy we made the choice to share the space as coming up with my own sound bed would have been a huge undertaking and one that I know would not have been as successful. The realisation of range of skills required to master a really great instillation does lead to just how vital collaboration can be. Although Ryan’s music wasn’t written for my work, and my work wasn’t a response to his sound, it was always in my mind that this would be the type of backdrop my work would have. Had it not been going to be there then the sound, or the choice not to have it would have needed to be deliberated much more rigorously. 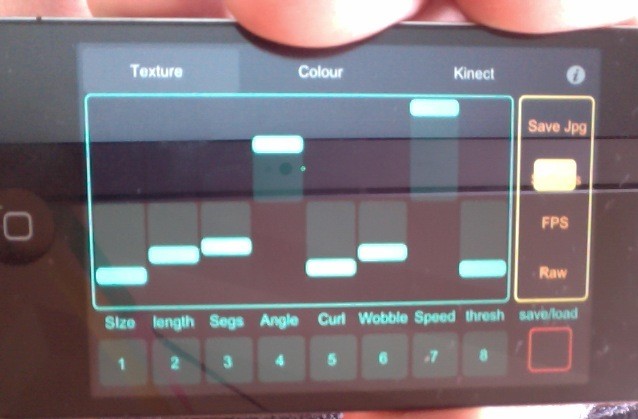 Setting up TouchOCS on my phone proved to be a pivotal part of this project, previously I had used a settings file to adjust things but that would recuire access to the computer editing the file then running the program again to see if the new settings were better.All very time consuming and doesn’t allow for easy fine tuning. With this system I could dial in setting from my phone. I built a 3 custom interfaces they allowed me to have very detailed control of line style, colour and fine adjustment of the Kinect sensor its self. I could alos save these settings and load them up as desired. Playing with these during the setup actually led me to changing the work to have it change it texturing at certain intervals. Something that I’m quite pleased with and has been the catalyst for ideas about future works.

Lighting – a subtle touch of sophistication
Thinking about lighting was something that came about by accident.(I’m a little embarrassed to point out that it wasn’t part of any plan) Setting up for the open day in a room that includes a huge lighting rig was extremely fortuitous. I used it because it was there. Now my lighting here wasn’t quite as successful as it was in a fully equipped video studio but it does make a difference in is subtle and understated way. Also having high quality stands and light helps give an extra touch of class to the space (My thoughts of home made shutters on a desk lamp were never going to cut it). Even mocking a rough adapter to allow using one of the light stands to mount the Kinect added a little something.

The final touches
Hiding the computer as much as possible was a vital part of the setup. This necessitated the purchase of extra long cords and a few extra layers of black (while apple wont let you turn off the monitor when connected to an external display I’ll never know). I really didn’t want the computer visible as part of this work, having it out in the open reveals to much. Having the engine on show gets people in to the “how” frame of mind; “oh theres the computer so xxx is running in to that”. Removing the computer goes a little way towards taking away the catalyst for people to start thinking about it.

The final tweak to the room involved dropping a cloth between Ryans and my work, this wasn’t because we wanted to be in separate rooms but because on entering you walked in to a big empty space. From there your focus was straight to the door in the opposite wall. You then found yourself trapped between two works wondering which one to look at. By placing the curtain directly in front of the entrance this forces you to choose a direction to go. Once you have made up your mind you quickly find yourself in one of the spaces and although you are aware of the other space it doesn’t fight for your attention. It was a deliberate choice not to curtain of the two spaces completely as we never intended it to be two separate works in tow separate rooms. We like the flow between the two spaces. The wash of light coming from the other space adds to the ambience of each space and helps to add to the excitement that there is more to explore. 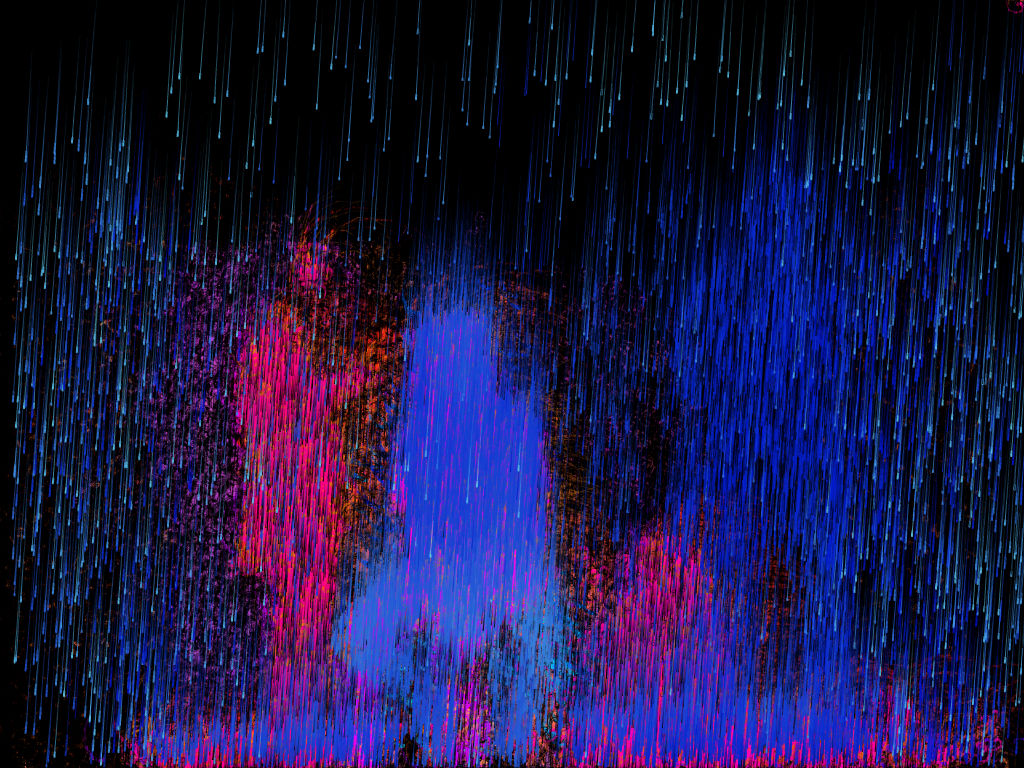 I like how little perfect moments happend when interacting with the work. Just this perfect balance of colour and form, they were most always lost as I would have to move to grab that exact moment and these movements would alter the image, so what I had was always an image just after that moment. I have always been of the idea that memory embellishes so the best moments are those that can’t be recorded.
My favorite moment from sitting contemplating the work was when  the textures swapped to the blue streaky rain like texture just a a rain like sound from Ryans work kicked in. I haven’t gone through the permutations of how likely this is, but I don’t think It was likely to happen in the first place let alone ever again but I do hope there will be many more that pop up over the life of the work.

A few images from the setup can be found at www.formula7.com/gradshow
I will move them and update the link once The grad show starts

Byproducts of my process can be found here http://www.formula7.com/workings/
Most of these were images my program just happened to collect while I was experimenting.

This entry was posted in e-media 3. Bookmark the permalink.